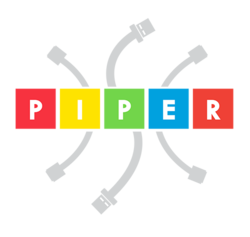 PIPER LAUNCHES THE FIRST DRAG-AND-DROP CODING PLATFORM TO PROTOTYPE TECHNOLOGY WITH THE NEW RASPBERRY PI PICO MICROCONTROLLER—AVAILABLE IN YOUR BROWSER AND BUILT FOR CHROMEBOOKS, MACS, AND PCS.


SAN FRANCISCO, CA — March 14, 2021 —Piper, an award-winning STEAM education company announced today the launch of Piper Make, the first drag-and-drop coding platform for the new Raspberry Pi Pico. The interface, compatible with Chromebooks and other computers, is free of charge and enables users to interact and build with their Raspberry Pi Pico in a hands-on way. With new project tutorials released every month to accompany the technology shipped with the Monthly Makers Club, the platform is built to let anyone learn the basics of hardware and coding. With visualizations of the microcontroller, translations of block code to text-based MicroPython, and more, Piper Make empowers users to start inventing with technology.


Starting Pi Day (3.14.21), members of the Piper Monthly Makers Club will receive their starter kits—which includes the Raspberry Pi Pico, an 830-point breadboard, LEDs, resistors, and wires—to use with new pieces of hardware (e.g. sensors, buttons, etc.) shipped in future months. At that time, tutorials will also be launching on our free platform—Piper Make. Starter kits are available as a one-time $30 purchase, as is membership to the Monthly Makers Club for $20/month.


“Our mission at Piper has always been to make the process of innovating with technology more accessible,” said Shree Bose, cofounder of Piper. “The reimagined Piper Monthly Makers Club is an exciting step towards realizing this vision, using the power of the Raspberry Pi Pico as a base to build with new pieces of technology shipped to subscribers every month. With the easy drag-and-drop coding interface and projects on our Piper Make platform, the true magic becomes what our users will be able to create and share with the world.”


Piper Monthly Makers Club Overview: New subscribers receive the starter kit (Raspberry Pi Pico, LEDs, resistors, switches and wires) which they can seamlessly use with the projects on the Piper Make platform. New hardware will then be shipped every month, with corresponding tutorials and projects released on Piper Make. The key features include:


PRICING AND AVAILABILITY:
ABOUT PIPER:
Founded in 2014, Piper, Inc. is an award-winning edtech start-up providing best in class STEAM education opportunities. From its headquarters in San Francisco, CA, Piper creates compelling STEAM learning experiences for individual learners and for schools. Through student-centered, hands-on STEAM education experiences that reflect the most current pedagogy, Piper supports educators, students and classrooms. Piper builds confidence in STEAM through project-based learning, spreads digital fluency to students and learners of all backgrounds and inspires the inventors of tomorrow.